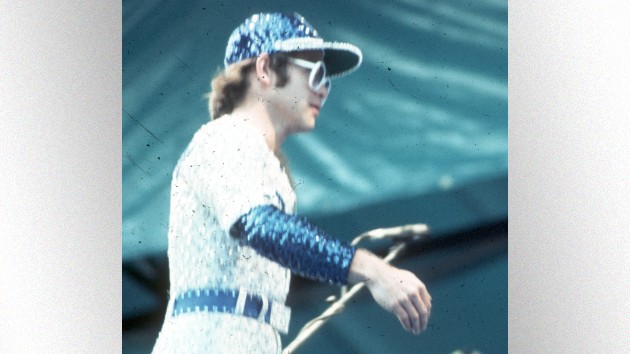 Forty-five years ago today, Elton John played the second of two historic concerts at Los Angeles’ Dodger Stadium.  Looking back on those shows — the largest concerts ever by a solo artist at that time — Elton says what he remembers the most was the sheer enthusiasm of the fans.

The shows, on October 25 and 26, attracted some 110,000 fans.  “My fondest memory was the electricity from the crowd. The energy was palpable — you could feel it vibrating from your feet!” Elton tells ABC Audio.

For his performance, Elton wore a now-iconic L.A. Dodgers uniform covered in sparkles from head to toe. It was designed by the legendary Bob Mackie, who created most of Cher‘s outrageous looks.

Elton says, “Being the first [solo] artist to perform in Dodger Stadium, Bob and I wanted to make a big statement while paying homage to America’s favorite pastime.”

“I said, ‘Let’s take the baseball uniform and make it fabulous,"” he continues. “Then Bob came back with something beyond my wildest imagination! It was incredible!”

The outfit’s so iconic, in fact, that in 2018, Harry Styles wore it for Halloween. Elton’s reaction? He tells ABC Audio, “I’m flattered and honored to inspire any and all fans and love to see fans enjoying it just as much as I did.”

As previously reported, a new Elton John Barbie doll has been created to commemorate those Dodger Stadium shows.  The Barbie is wearing some of Elton’s craziest ’70s fashions: sparkly pink glasses, a bowler hat, flared jeans and rainbow platform boots.

“The ’70s was one of the most stylish decades of all time!” Elton says of the Barbie’s outfit. “I wanted to capture the essence and meaning of what ’70s fashion was all about: radical self-expression and glamour. From head to toe — she looks like a rock star.”

The Kid LAROI announces Bleed For You college campus tour

“She was super chill”: Nick Jonas was impressed by how his daughter behaved at Walk of Fame ceremony